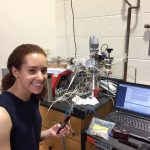 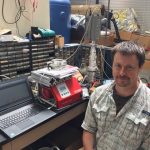 Chad Barrow is part of the TUNL REU program. His research project is to develop a residual gas analyzer based leak checking system using argon for low temperature non-magnetic cryogenics employing plastics and other composite materials. 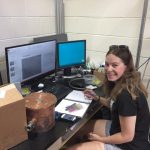 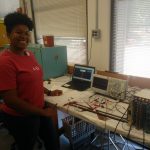 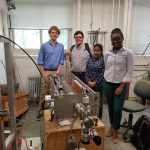 Thomas Chappelow, Clay Fogleman, Deepasika Gedara, and Elon Price (from left to right). Thomas, Clay and Elon are undergraduate students, while Deepasika is a Graduate student. They are developing a pulsed source electron accelerator that will be used to calibrate beta decay detector. The goal of their accelerator is to better understand the Bremsstrahlung losses associated with such detectors. 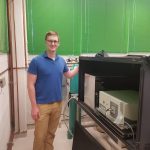 Erik Lutz participates in Raman spectroscopy of solid deuterium to understand it conversion rate from ortho to para states. He is currently upgrading the gas handling system for this Raman spectrometer so that we can mix a  volume to introduce a known concentration of a contaminant to a deuterium gas sample. 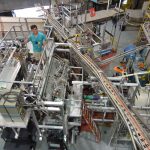